To: All Members of the GSRMA
From: President Matt Givens & John O’Brien, Central Committee.

In this time of great national sacrifice and togetherness, it is appropriate to reflect on the sacrifice of members of An Garda Síochána who made the supreme sacrifice in the service of their country.

Friday April 3rd 2020 is the 50th Anniversary of the killing of unarmed Garda Richard Fallon in the course of a bank raid on the Royal Bank of Ireland, Arran Quay on April 3rd, 1970. Dick was attached to Mountjoy Garda Station. 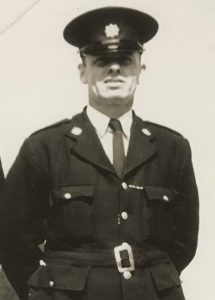 At 1100 hrs on Friday 3rd April, 50 years to the day, date and time, we are asking all members of the Garda Síochána Retired Members Association together with their families and community to pause for a moment in Dick’s respectful remembrance and, where possible, light a candle in silent tribute.