By GSRMA HQ|2020-07-08T13:22:34+01:00July 8th, 2020|News|
The GSRMA were proud to be associated with marking the 40th anniversary of the murder of Garda Henry Byrne and D/Garda John Morley, who were shot dead at Shannon’s Cross, Loughglynn, Co. Roscommon following a bank raid at Bank of Ireland in Ballaghadereen on the 7th July 1980.
The local committee organised this scaled down event in conjunction with An Garda Síochána and was attended by Commissioner Drew Harris and many local and regional Gardaí.
The GSRMA were represented by President Matt Givens along with General Secretary Mick Lernihan as well as many Retired Members from the local Branch and also some who were reared and/or living in the locality.
The Social Distancing event was a poignant reminder of the dangers faced by Gardaí on a daily basis and coming so soon after the tragic death of our colleague, Colm Horkan RIP a short few miles away. Colm’s family attended the ceremony as did Ann Byrne & Family and Frances Morley & Family. The Garda Survivors Association representatives of Michael Griffin and Breda Hand also attended. Well done to the organising committee led by Martin Duggan.
GSRMA President, Matt Givens laid a wreath at Shannon’s Cross on behalf of the Garda Síochána Retired Members Association. 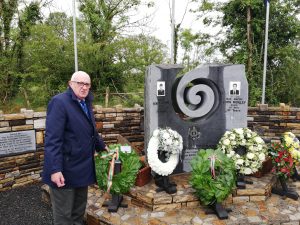 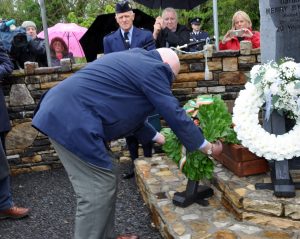